Just over a week ago, I got a life-changing call from the Match Coordinator at our adoption agency. “We presented your profile to (the birth-mom) and she chose you!”

I almost didn’t believe her at first and kept asking questions like “Are you sure?”, “So this is IT? Like really IT?”. The last birth-mom that chose us was  through a private connection and not through our agency so I wasn’t sure how this process worked. “Is the birth-mom sure that she wants to go through with this?”

We had chosen to present our profile to a couple of other birth-moms through our agency in the last couple months but never heard anything back from each one so this call was a huge surprise. I remember looking at this particular birth-mom’s info and we knew that this one was a special one. We didn’t get a lot of info but we do know that she is 22 years old and has had two other babies, neither which are in her care. We knew we wanted to present to this birth-mom as soon as we read about her.

That is still crazy to me! There has to be such weight to that. To choosing a forever family to raise your child. Wow! What an incredible honor for someone to choose us!

I sat on that phone call with the Match Coordinator and I remember feeling like I wanted to be so excited, but at the same time, an equal amount of fear kept creeping in. What if? What if she changes her mind? What if this doesn’t work out….again?

I got off of the phone and just felt so torn until I spent time praying and here is what I realized:  I do NOT want to be crippled by fear! THIS is our time of preparation, our ‘pregnancy’ and I do not want to miss any part of the joy in it because I’m afraid! So I made a choice right then and there, that I would walk forward in confidence that this is the baby that God has planned for us until I hear anything different!

Could she change her mind? Sure! In the state of Arizona, birth moms have up to 72 hours after the baby is born to change their mind and take the baby back. It’s a risk, yes, but it’s a risk that we are jumping into with our whole hearts so that we don’t miss one bit of it.

And here is the safety net….if she does change her mind, it will hurt like hell, again, BUT GOD. The same God who held us as we grieved the loss of the twins and healed our aching hearts, would do the same thing again and we would make it through with deeper intimacy with Jesus.

All of that to say, we are beyond excited to announce that WE ARE HAVING A BABY BOY, DUE JUNE 2ND!!!!

More details to come, but for now, we are celebrating hard core over here! 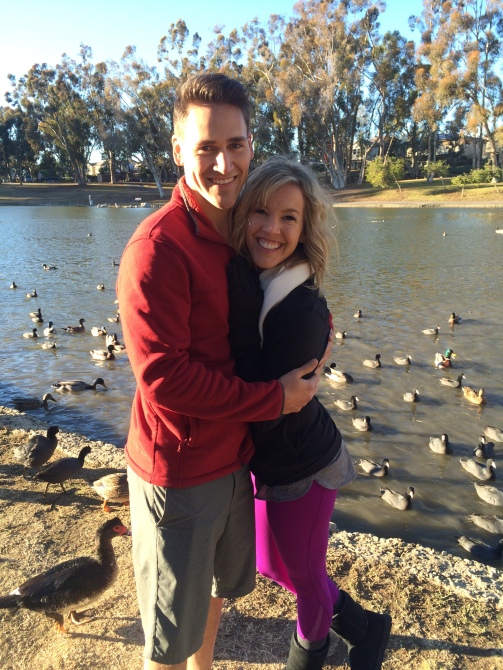 I just wanted to pop in here and give a little update on our quest to get pregnant! For those new to our story, I will give a little background (this will just be the facts….I could write a novel on the emotional and spiritual journey through all this!) Caleb and I have been married for 4.5 years. When we got married, I starting charting my cycle to avoid pregnancy but then after about 6 months, we decided to stop preventing because we didn’t actually mind if we did get pregnant! About 6 months later was about the time when the Lord completely changed my heart about adoption and we started that journey in January, 2013. (That is again, another novel!)

Adoption was our first choice of how we wanted to have kids but we have always wanted biological kiddos as well. So when a year of “not preventing” passed and we hadn’t got pregnant, I wasn’t too concerned because we were in the middle of our adoption, and at the time, that was pretty exciting!

Well, here we are in 2016, and 4 years has passed. I’m not sure where the line is drawn between the terms “not preventing” and “trying” but we have lived both of those out in the past 4 years! About 2 years ago, we started to get pretty concerned as to why I wasn’t getting pregnant. A few friends had referred a specific infertility doctor to us so we made our first appointment.

I’m pretty sure I cried through most of that first appointment. It just sucks. It sucks to have to be there. It sucks to even utter the word “infertile”. Like, who gets to decide that? I couldn’t believe that I was sitting in that office.

Our doctor explained the series of steps that we would take. Testing. Probing. Hoping. Planning. More testing. He talked about the magical age of 35 and how we need to do as much as we can to get pregnant before I turn 35 because “your chances of getting pregnant drop off a table after that birthday”. I remember sitting there at 32 years old thinking that I had so much time.

Now I sit here, almost 35 (in 5 months) in shock at how fast the last 2.5 years went. It just makes me giggle at how much life planning I do (and keep doing)! If life had gone according to my original plan of what I wanted in my early 20’s, I would have 9 kids by now! That was my hope for so long. I wanted a family of 11! I am so small and my plans are just so silly and I’m grateful for that because I serve a HUGE God who is in full control….and that is a great thing.

Here is the truth….1 in 7 women deal with “infertility”. That’s A LOT! But we rarely talk about it. I’m not sure why because I know that I need community and people who ‘get it’. Maybe we don’t know how to talk about it. Maybe it’s just too painful to hear coming out of our own mouths. Maybe saying it out-loud makes it so much more real when all we really want is for it to disappear. I’m not sure what it is for each person battling it, but I’m here, thick in the battle, ready to share!

So now for the update on our quest to get pregnant:  First, (about 1.5 years ago), I got my fallopian tubes checked for blockages. That came out clear. Then I had to get a blood test…clear. Next, Caleb had to get checked for healthy swimmers….clear.

We are now to the last step before we decide on big words like “IVF”. I am currently on Chlomid, a drug that helps women to ovulate and sometimes drop multiple eggs. We started it in January and it didn’t work. We can do this up to 6 rounds and that is really all the body can take.

So here’s to round 2! We are really hoping and praying that we get pregnant within this next 5 months so that we don’t even have to think about the next steps. We would love for you to join us in prayer for that specifically.

To be honest, I would be shocked if we got a positive test. After 4 years of negative tests, it just seems impossible, but I know that God loves to do preposterous things that we can’t even imagine!

***update from just a couple hours after this post was originally written – I forgot to mention that we have also been going down a naturopathic route for fertility. If you know me, you know that when it comes to health, I prefer the most natural methods possible, and this is no different with our fertility issues. I have been seeing a great naturopathic doctor for a few months and have seen great improvements with my hormone levels and adrenals. Next step will probably be oils and acupuncture. At this point, we are trying both Western and natural routes to see which works first!